Spouse Visa to the United States

Because the laws and procedures in obtaining a spouse visa are so complex, I illustrate the process by way of examples.  Please note that these are only a couple of examples of a variety of different ways on how a spouse can immigrate to the USA.

Disclaimer. The following is intended only to give you a general idea of the topic. It is NOT intended to be legal advice. Everyone’s goals and situations are unique. Please consult an attorney to determine which method is best for your specific goals.

How to obtain a spouse visa to the U.S. through a couple of real-world examples

Anna, a U.S. citizen, and Jeff, a Filipino citizen, were recently married in Angeles City, Philippines.  Upon her return to the states, Anna contacted Attorney Avelino for guidance on how to bring her Filipino husband to the USA.  Attorney Avelino explained that obtaining permanent residency for Jeff through a spouse visa could be described as a three step process.

Step 1: Anna must file the Petition for Foreign Relative with USCIS

The first step is to prepare and file Anna's petition on behalf of her husband Jeff to USCIS.  In the petition, Anna must prove she is a US citizen and that she is in a bona fide lawful marriage with her husband Jeff. In addition, if either was previously married, they must prove that all prior marriages have been lawfully terminated.

Step 2: Anna and Jeff must submit the immigrant visa application to NVC

Once the petition is approved, it is forwarded to the National Visa Center (NVC).  Once the NVC receives the case, Anna will need to pay the immigrant and affidavit of support fees.  Once those fees are paid, we can prepare and file Jeff's immigrant visa application as well as Anna's Affidavit of Support documentation.  The affidavit of support is used to prove Anna has the financial ability to support her husband.

Step 3: Jeff must prepare and attend his immigrant visa interview at the US Embassy, Manila

Once the NVC has received the application and all necessary supporting documents, they will schedule Jeff for his immigrant visa appointment at the U.S. Embassy in Manila, Philippines.

On the day of his appointment, Jeff had to wait a couple of hours in the waiting room before he was seen by an officer.  The actual interview only took about 15 minutes.  After reviewing his file and Jeff's documents, Jeff was asked basic questions about his identity as well as questions about his relationship with Anna and why he decided to marry her.  Since his relationship with Anna is bona fide, it was easy for him to answer the questions being asked by the consular officer.

The officer then congratulated Jeff and told him that he should receive his visa within a couple of weeks.  Once Jeff enters the USA with his immigrant spouse visa, he is already a permanent resident and his green card will be mailed to him in a couple of months.  While waiting for the green card, Jeff can use the stamp in his passport as proof he is a lawful permanent resident.

Christian, a U.S. citizen, recently married his wife Amy.  While courting Amy, Christian learned that Amy had entered the United States several years ago on a tourist visa and was now out of status (TNT). 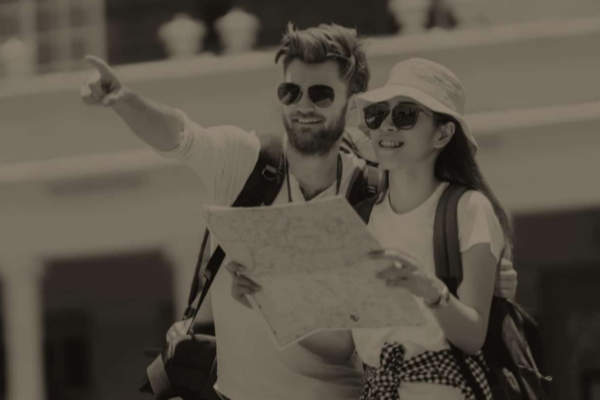 Attorney Avelino explained to them that although overstaying a tourist visa is never encouraged and illegal, the immigration laws will still allow Amy to adjust her status to a lawful permanent resident based on her marriage to a U.S. citizen as an Immediate Relative as long as she is otherwise admissible.

With the help of Attorney Avelino, they file the spousal petition and application to adjust status for Amy.  At the same time, they also file an application for employment authorization (work permit) for Amy.  The work permit is usually issued a few months before the green card.  This way, Amy can begin legally working even before her green card is issued. In addition, Attorney Avelino prepares Christian's Affidavit of Support proving he has the financial ability to support his wife.

A few weeks after filing the package, they receive receipt notices for the petition and applications from USCIS. Once Amy receives the receipt notice for application to adjust status, she will be in "authorized stay" pending the outcome of her adjustment application.

In around one month after filing, Amy was scheduled for a biometrics appointment where they took her fingerprints and picture to conduct a background check.

Several months later, the couple was scheduled to appear at the adjustment interview at their local USCIS office.  Attorney Avelino prepares them for the interview and they pass the interview without any problems and the officer informs them he is approving their case.

Within a few weeks, Amy receives her green card in the mail.

As noted above, there are a variety of ways to obtain a spouse visa to the United States. However, due the complexities involved in each case, please consult an immigration attorney.